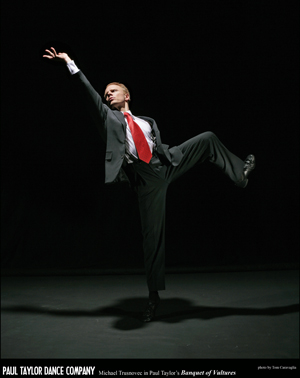 Of modern dance’s pioneering choreographers, precious few are represented in extant companies. But those that live—thrive, struggle, or something in between—have racked up some impressive anniversaries. Martha Graham’s troupe is 80; two Graham alumni, Merce Cunningham and Paul Taylor, have run their companies for more than 50 years, and the Alvin Ailey American Dance Theatre is right behind at 48. Graham and Ailey’s companies, since their founders’ passing, have sought to preserve their dances and add relevant repertory. Cunningham (b. 1919) and Taylor (b. 1930) are still remarkably productive. But all four companies face the issue of how to make early dances—and the groundbreaking vocabularies used to create them—vibrant and meaningful to audiences several generations removed. A continually renewing generation of dancers keeps the work alive, but we seem to be amidst a group with extraordinary gifts, capable of bringing a fresh focus to the work. They include Michael Trusnovec (Taylor), Fang-Yi Sheu (Graham), Clifton Brown (Ailey), and Jonah Bokaer and Julie Cunningham (Cunningham).

It’s no surprise that these dancers possess excellent technical skills. Most have studied dance for much of their lives and were likely the best of the best in increasingly competitive surroundings until joining these historic companies. Of course superb technique is important, allowing for faster muscle memorization so the dancer can transcend thinking about the steps and dig into the nuances of expression and timing. But it is not what makes these specific performers great. In each case, the dancer is at the service of the choreographer’s statement, rather than vice versa; the onstage ego is secondary to a respect for the choreography. This noteworthy quality, when combined with a rare mix of fierce mental and physical intelligence, brings all of these dancers into a class of their own.

Both Taylor and Cunningham have had remarkable and continuous success for more than half a century. Their companies are vehicles for their founders’ artistic visions, featuring repertory only by them. Their dancers have the luxury of settling deeply into one technique. Taylor’s repertory has always had a special place for men, as Taylor—who danced with Graham and New York City Ballet—was a larger-than-life stage presence, instilling grace and bravado in his roles.

Some of the storied Taylor men have been in the ‘tall and dark’ mold; David Parsons, Christopher Gillis and Taylor himself drew the eye before they even moved. Taylor’s current male star, Michael Trusnovec, is at first glance an unassuming presence. He is average height, a redhead, and tends to drop his chin, contrary to what every dance teacher will tell you to do. But if Taylor outlined the precise shape that any given move should conform to, that’s where Trusnovec takes it; he has an innate understanding of the vocabulary that some of the dancers lack, overworking shapes and making Taylor’s naturalistic, elegant style look more difficult than it should. Trusnovec never looks earthbound, despite the groundedness of the style. He expresses ideas and emotions with an intuitive and total physicality, rather than a dramatic facial expression. He moves quicksilvery fast—unless the occasion demands glacial slowness. His demeanor is humble and self-effacing, yet undeniably noble.

Taylor’s vocabulary is so familiar that it can sometimes feel old-hat or clichéd. His signature movements, such as upward curving arms and bent-leg jumps, are building blocks of a modern style so essential that we overlook it, taking for granted its fundamental elegance and logic. Trusnovec strips it to its essence and charges it with immense dignity, reminding us of its timeless splendor.

In contrast to Taylor’s story-driven or formal dances, in which community is paramount, Merce Cunningham’s choreography can evoke great emotion, but it is not achieved through narrative. It’s more in the way a sudden gust of wind can delicately ruffle the fronds of a willow tree, or how the color and composition of a Rothko painting can elicit a profound feeling. Despite the abstract nature of his dances, Cunningham’s dancers engage one another during performances as much as the next company, but it is with curiosity rather than emotion. This willful detachment channels the viewers’ focus even more toward the rich formal constructs.

Cunningham’s dancers make his work look deceptively easy, which it certainly is not, with its highly turned-out foundation, complex weight and direction shifts, spidery phrases that end abruptly in sustained balances and timing not reliant upon musical rhythm. Julie Cunningham and Jonah Bokaer currently exemplify the Cunningham style. Julie, who has a strong ballet background, has an unusually limber spine and the finely shaped, precise feet that enhance this choreographer’s style so well, underlining its kinship to ballet. Both dancers have extremely long lines that emphasize the wiry sculptural quality of the dances. Bokaer works independently with the software Dance Forms (Merce Cunningham also uses a computer to plot movement), and in fact his positions are so ‘correct’—clean and precise—that he himself could be an idealized animated figure.

Cunningham and Taylor run companies which are successful but modestly scaled. Alvin Ailey’s (1931—1989) American Dance Theatre is another matter. Under his muse Judith Jamison’s direction, it has become a model for dance companies, with an endowment, a sparkling new headquarters, an annual four-week New York stand, and a healthy touring schedule. It boasts more technical talent than any other modern company, benefiting from its own school and degree programs. Clifton Brown is proof of the strength of the system they’ve developed; he attended the Ailey school and unique Ailey/Fordham BFA program. He breezily embodies the expanding amalgam of dance genres in Ailey’s rep, including new forms that stray a long way from Horton and ballet, such as hip-hop.

Brown’s endless limbs and limitless extensions elongate each line. It doesn’t make sense that someone so tall could move as quickly and effortlessly, soaring in jumps and multi-turns. He is athletic, and yet perhaps his most appealing trait is the plushy quality of his movement, approaching the delicate. Ailey’s dancers are all remarkable technique-wise; each has a distinguishing style. But there is a hard-hitting, competitive grit to many of their performances, as if it were an athletic competition rather than an artistic rendition. Brown lacks the brittleness that emerges elsewhere, instilling his superhero technique with a warmth and humanity.

Ailey’s own dances form a smaller percentage of the rep each year as new dances are commissioned. Like any commissioning program, some work; some don’t. Ronald K. Brown’s contributions are notable, particularly Grace, and while his specialized style departs radically from Ailey’s, conceptually it fits by also combining threads of African with modern dance. Many of the new works (including Brown’s) are set to ‘soundtracks’ of popular music. While this pleases audiences and solves a slate of problems—changing dynamics, casts and narrative— there is a banality and redundancy that feels tired if the movement itself is not satisfying, which it often isn’t. Last season, a welcome addition was Hans van Manen’s Solo, a trio to Bach; it blended showmanship with strong choreography and felt at home in the context.

Graham’s company faces a similar problem of how to rejuvenate the repertory while honoring Graham’s legacy. Unfortunately, such artistic issues have become secondary, behind survival. Controversy should not be a legacy of Graham (1894—1991), but it is becoming one in the wake of a contentious lawsuit over the rights to her work. The talk of the 2006 gala (because of linked financial woes, just one performance represented the New York season) was not first about the brilliance of the company’s performance or the timeless power of Graham’s dances. Instead, it was about the inclusion of Richard Move’s Graham impersonation as a way to broaden audiences. That he emceed a portion of the show already inflamed some in the audience, but he then performed a duet with Desmond Richardson from Graham’s Part Real—Part Dream (1965). Move is a trained dancer and choreographer, but not a member of the Graham Company, nor is his technical skill comparable to Richardson’s. Watching him perform, knowing that the purpose-trained company stood idly backstage, was truly dismaying.

One of those backstage bystanders was Fang-Yi Sheu, a star of the company who captures the essence of Graham’s genius, and who performed a too-brief, gripping segment of Clytemnestra. Graham’s highly physical choreography probes the dark recesses of the psyche like no other. But it can feel dated, like a silent film, depending on the piece and the performer. Renditions of Graham’s signature contractions and drop-dead hinges to the floor are performed by the company diligently, seriously, and frequently with knitted brow. But Sheu dances with a stillness, as if she’d passed through the wall of a hurricane into its eye, the storm’s ferocity permanently etched in her gaze. She is petite, but there is never an effete feel to her performances; she is driven by fundamental human instinct and emotion rather than self-conscious role-playing. Her ability to grasp and convey the core of Graham’s message charges the dances, some ancient by modern dance’s standard, with a contemporary urgency. Now let’s hope that Janet Eilber, company director and one-time principal dancer, can manage to keep Sheu around.

In unearthing the ongoing, regenerating success of these masters’ styles, is it advantageous when the day to day operations—classes, rehearsals, role interpretations—fall to those who may have once served as the choreographers’ muses themselves? They have a profound understanding of both the technique and the artist’s entire oeuvre, but there is a level of remove available to outsiders that would allow much-needed perspective. After 50 years, a choreographer’s style has undergone its own version of natural selection—it’s been codified and pared of things that haven’t worked, and this goes for repertory too. There is the benefit of choices that have only served to refine their work. And there are those brilliant interpreters that have fortunately emerged to become standard-bearers for our generation. Let’s hope that each subsequent generation proffers such talented artists to continue to revitalize the early works of these masters.

Thinking with the Body: Dance and Performance at the 13th Gwangju Biennale

This year’s Gwangju Biennale, set to take place in Gwangju, South Korea in April, includes the work of two celebrated choreographers, Trajal Harrell and Cecilia Bengolea. Through interviews with these dance artists and the biennale’s curators, Emily May explores the history of Gwangju; the organizing theme of “Intelligence and the Expanded Mind”; and the prominence of performance in the program.

Sorry/Please/No: A Dance for Survivors, Citizens, and Queens

Dance Your Fears Away

LOVETRAIN2020 looked like a lot of fun to dance. Emanuel Gat choreographed the work to songs by 1980s British band Tears For Fears (Roland Orzabal and Curt Smith).